Deep in the Heart of (East) Texas
The Michael Unit Hospice

Highway 287 shoots pretty straight southeast from Fort Worth across the bleak Texas flatlands, amid random clusters of ranch buildings, scattered groups of grazing cattle, and stands of stunted scrub oaks. My companions and I drove toward the Mark W. Michael Unit of the Texas Department of Criminal Justice (TDCJ). I had met Joelle Koncelik at the Federal Medical Center in Fort Worth, where she supervises the Inmate Hospice Volunteer Program in many ways a model start-up program (see NPHA News, Winter 1996-7); Carol Evans and Colleen Lemois, who were planning to set up a hospice program at the Louisiana State Penitentiary at Angola, had joined us to find out what they could from the new program at the Michael Unit. Joelle’s vibrant conversation and great fund of information and experience in prison hospice work more than offset the monotony of our trip.
Eventually, somewhere between Tyler and Nacogdoches, we were confronted with a clutch of directional signs, which allowed us to choose from among four state correctional facilities in the neighborhood (with a total inmate population of 14,000, we were later informed). The road to the Michael Unit soon brought us within sight of a rather unprepossessing cluster of low-lying buildings of dun-colored brick that seemed to be part of the land on which they sat. We were escorted to the office of Warden Mike Wilson, who generously took time to tell us about his prison, especially the hospice facility, and to give us a personal tour.
The Michael Unit is a full-service prison housing some 3,000 inmates, ranging from minimum security risks in the outlying camp facilities to the 500 maximum security inmates in ‹administrative segregation. All health care services in TDCJ are provided through contractual arrangements with outside agencies, chiefly the University of Texas Medical Branch (UTMB) and the medical school of Texas Tech University. The entire medical staff at the Michael Unit consists of UTMB employees, who can readily tap the vast resources of the university medical system. 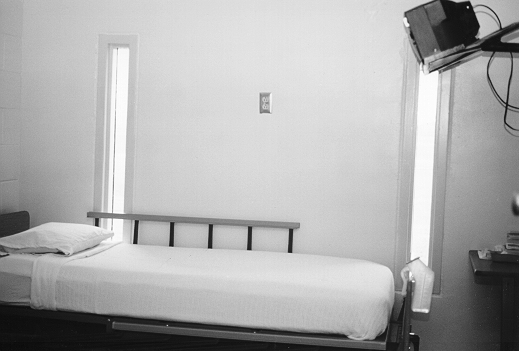 The hospice at the Michael Unit was opened in response to state legislation which enables TDCJ to either “provide direct hospice service for terminally ill inmates” or “contract with a licensed hospice for the provision of those services.” The in-house services must meet the same standards as those in the community, except where they would “conflict with security considerations.” According to TDCJ policy, hospice services focus on palliative care “the reduction or abatement of physical, psychosocial and spiritual symptoms of a terminal illness” provided around the clock by an interdisciplinary team consisting of a physician, registered nurse, social worker, and chaplain. (At the Michael Unit, these are Dr. John Zond, Judy Kilgore, RN, psychologist/social worker Jo Green, MS, and Chaplain Donald Lacy.) At first, TDCJ intended to provide hospice care in all the infirmaries of the system, in tandem with conventional clinical procedures. But the medical staffs soon experienced difficulty in making practical distinctions between hospice care and other forms of terminal care: as they went from one patient to the next they were required to adopt wholly different clinical mindsets. Hence the department‰s decision to create, with the assistance of UTMB-Galveston, three hospice facilities to serve the entire system, of which the 22-bed facility at the Michael Unit is the largest. In addition to providing high-quality in-patient end-of-life care for inmates from throughout the state, the staff makes medical recommendations for inmates who might be eligible for compassionate release.

Patients with a terminal illness may enter the Michael Unit hospice when they have a “prognosis of six months or less to live.”They must sign an advance directive refusing the application of heroic lifesaving measures or a DNR order. Due to the general difficulty of anticipating the time of death accurately, patients often arrive at the unit very close to death indeed. Often also the trauma of a long journey from the patient‰s ‹facility of originŠ takes a severe toll. The staff would prefer receiving patients at an earlier stage of the process, when there is still time to help them prepare for death. In fact, some patients perk up after their arrival, especially if they are able to spend more time with their families. One patient had arrived scarcely alive, but had regained strength and was now walking around the unit with the help of a cane. 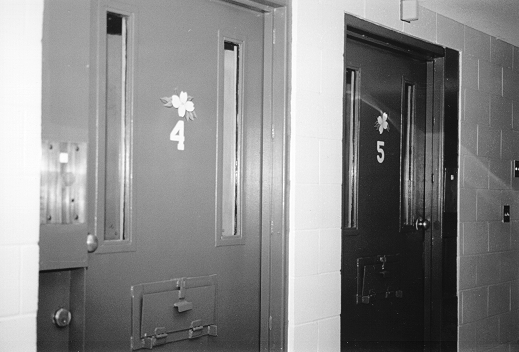 Steel doors, painted flowers
All rooms have single occupancy and are equipped with radio and television. Inmates painted big scenic murals in the day room and the halls. On the door of each room they painted a dogwood blossom, for which nearby Palestine is famous. Plans for the future envision a patio complete with brick planters and some modest landscaping. There are also plans to implement a pet therapy program with the acquisition of a resident canine mascot.

Initially, the resident staff received training in the ways of hospice care from members of the Texas Hospice Organization, assisted by Joelle from FMC-Fort Worth. At the upcoming joint convention of the Texas and New Mexico Hospice Organizations, the Michael Unit staff would get in-depth information on current concerns and, most important, a feel for the dedication and competence of the hospice community. Hospice training will also be conducted by the staff of the Hospice of East Texas, based in nearby Tyler, beginning in the spring of 1997. Exclusive concentration on hospice care will provide ample opportunity to develop and improve their skills. The new hospice, in their view, formally enacts the approach they have been following for over a year since the Director of Nursing, Andrea Martin, began encouraging other corrections facilities to send their terminally ill patients to the Michael Unit.

Volunteers are an important component of any hospice program, providing crucial support to patient, friends and family, and professionals. They help the patient with physical tasks like eating, dressing and moving; they spend time with the patient reading, chatting, watching television, holding a hand; they also may do some housekeeping and run errands. In are referred to hospices near their homes for bereavement counseling.
The hospice program seems to have won general approval throughout the Michael Unit. The aides bring to the general prison population first-hand accounts of the caring atmosphere and the genuine concern of the staff, thereby overcoming much of the inmates‰ ingrained suspicion of all administrative efforts. The hospice staff repeatedly credits the program’s success to Warden Wilson’s cooperation and support. The entire staff at the Michael Unit seems proud of the program and eager to improve it. “In my nineteen years in corrections,” comments Assistant Warden Herrera, “this is the most exciting development I have seen.” When questioned about starting correctional hospices elsewhere, for example at Angola, Warden Wilson replied: “You won’t have any trouble convincing the staff. Even hard-headed old-school COs will see the need. Any reluctance you meet will be from people who don’t like dealing with death.” His advice: “Be extremely flexible.”

1 thought on “Heart of Texas”